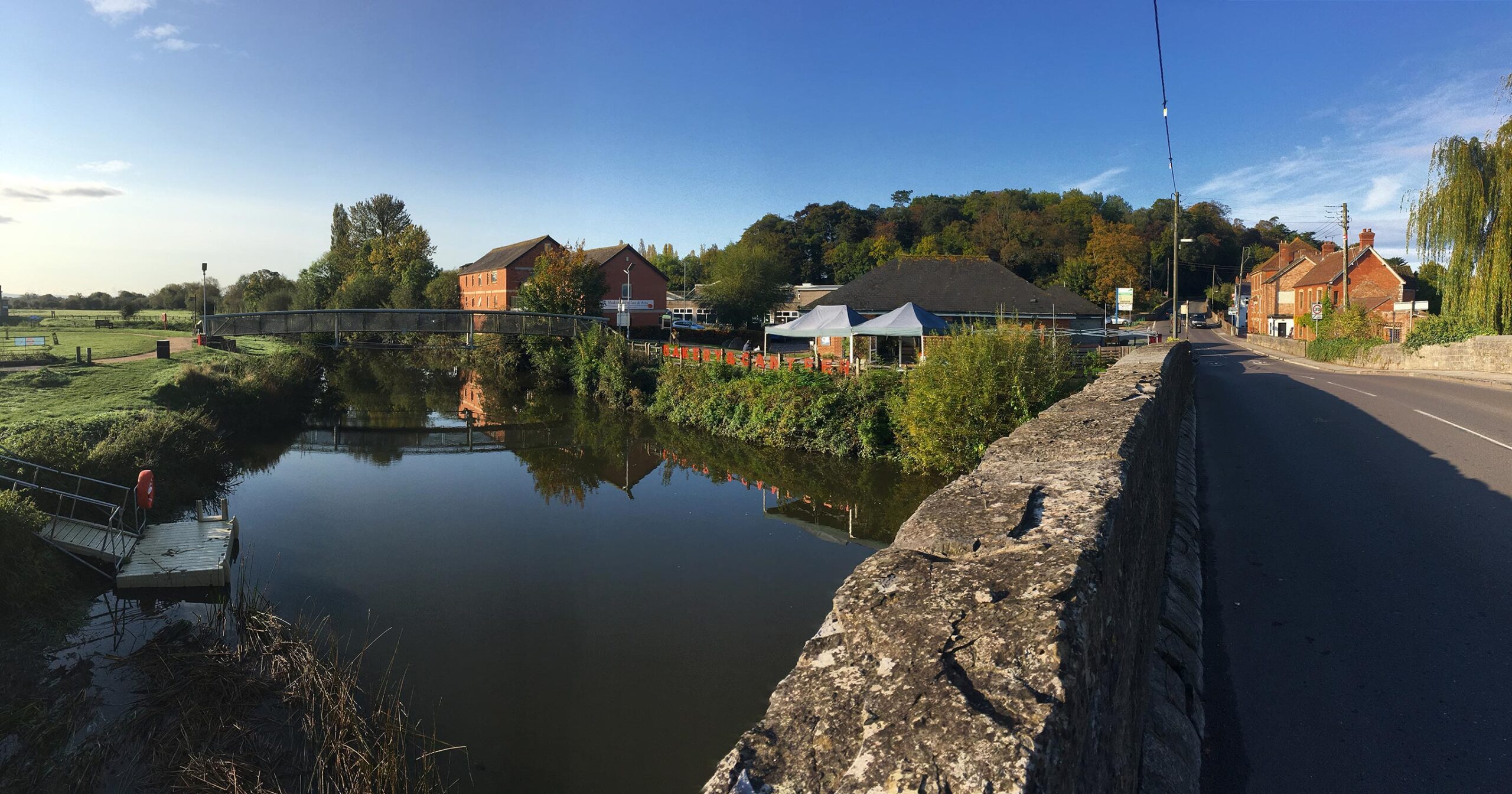 On the ancient way from Glastonbury to Taunton, Langport consists of two parts, one on the hill and one by the River Parrett. The former owed its origin to its defensible position, and the latter its growth to its facilities for trade on the chief river of Somerset.

Its name looks like Anglo-Saxon for “long port”, but it may be “long market place” that could have been on the causeway that is now Bow Street, many of whose houses tilt backwards due to settlement of the land behind the causeway.

Langport could have been important during the Roman occupation as there were several villas in the vicinity.

It was one of the forts listed in the Burghal Hidage indicating its strategic position for King Alfred, as well as being close to the royal centre of Somerton.

The first charter, granted by Elizabeth I in 1562, recognised that Langport was a borough of great antiquity, which had enjoyed considerable privileges, being governed by a portreeve. It was incorporated by James I in 1617, but the corporation was abolished in 1883. Langport was represented in parliament in 1304 and 1306.

In medieval times Langport was an important centre for cloth making.

The charter of 1562 granted three annual fairs to Langport, only one fair is now held, a horse and cattle fair on 3 September.

A Saturday market was held under the grant of 1562, but in the 19th century the market day was changed to Tuesday.

On 10 July 1645, the Battle of Langport was fought here, in which the last effective Royalist field army was destroyed and the Parliamentary victory in the Civil War became all but inevitable. When the Royalists retreated through the town many were killed by the bridge over the Parrett, and many of the buildings were set on fire. Although one authority states this was an act of the Parliamentary cavalry, reading contemporary accounts of the battle it is clear that the Royalist cavalry set the lower town on fire in the (vain) hope that this would hinder the pursuit led by Cromwell’s cavalry.

The Great Bow Bridge, which now carries the A378, is a three-arched bridge, constructed under the terms of the Parrett Navigation Act of 1836. Completed in 1841 at a cost of £3,749, it replaced the previous medieval bridge, with its nine tiny arches, all too small to allow navigation. The medieval bridge consisted of a total of 31 arches, of which nine crossed the river, and 19 of the original arches were located by ground-penetrating radar in 1987, buried beneath the road which runs from Great Bow Bridge to Little Bow Bridge.

Around 1840 the Westport Canal was built, which joined the river at Langport. The railway came to Langport in 1853 and opened up new markets, but caused the decline of river traffic.

In World War II Langport was the site of a United States Army military prison or Disciplinary Training Center.

ASK US ABOUT FUNCTIONS

This website uses cookies to improve your experience while you navigate through the website. Out of these, the cookies that are categorized as necessary are stored on your browser as they are essential for the working of basic functionalities of the website. We also use third-party cookies that help us analyze and understand how you use this website. These cookies will be stored in your browser only with your consent. You also have the option to opt-out of these cookies. But opting out of some of these cookies may affect your browsing experience.
Necessary Always Enabled
Necessary cookies are absolutely essential for the website to function properly. This category only includes cookies that ensures basic functionalities and security features of the website. These cookies do not store any personal information.
Non-necessary
Any cookies that may not be particularly necessary for the website to function and is used specifically to collect user personal data via analytics, ads, other embedded contents are termed as non-necessary cookies. It is mandatory to procure user consent prior to running these cookies on your website.
SAVE & ACCEPT